By Sea Trek TeamNovember 13, 2019No Comments

Reprinted with permission from the Winter 2010 issue of California Kayaker Magazine .

The female Gray whale slid through gunmetal gray water past the jutting Point Reyes Peninsula, tinsel streamers of rain pockmarking the turgid ocean swell. Gulls hovered overhead, kiting and wheeling before cutting away again. Gravid with calf, in her hurry to reach the safety and buoyancy of Baja’s calving lagoons, the whale ignored the males’ intent upon engaging her in mating. With measured urgency she maintained a speed of three to five knots, and a regular rhythm of four to six breaths, or blows, per minute, diving at three-to-five minute intervals. Having traveled much farther north to feed, she will not reach the calving lagoons before her calf arrives. If lucky, the cow-calf pair will be able to withstand winter storms and escape killer whales en route to the Baja lagoons and safety, and pass our shores once again this spring.

Each winter as the solstice approaches, many Californians anticipate the migration of the Gray whales past our shores, signaling the advent of a new year. The majority of the Eastern Pacific Gray whale population makes its stately progress twice each year past the California coast. In late fall and winter, having laid down a several inch thick layer of insulating and nourishing blubber, they head south from the Arctic’s Bering and Chukchi seas to their sheltered winter breeding lagoons in Baja California. Then, in late winter and spring, mating and calving accomplished, they begin their trek north again to resume feeding throughout the summer and early fall in high-latitude waters.

The most coastal of the large whale species, their path takes them through the Gulf of the Farallones National Marine Sanctuary just beyond the Golden Gate, using our waters as a marine superhighway. But this pattern is changing.

Warming ocean temperatures in the Arctic are hastening polar ice cap melt. Consequently, the nourishing amphipods–tiny mud-living marine invertebrates on which Grays feed–are disappearing from the Grays’ traditional feeding grounds. Amphipods feed on dead marine plants, or algae, that rain down from the underside of the ice sheet. When the ice sheet shrinks, the amphipods disappear, and Gray whales must seek sustenance elsewhere.

Some Grays have begun to stall out along the migration path, utilizing coastal waters in a different way. Instead of marine superhighways, these waters are now becoming “seafood buffet” tables. In addition to–or as an alternative to–amphipod-laden mud, changing conditions have caused Grays to switch to other prey such as swarms of mysid shrimp, or even herring roe slurped from kelp fronds.

Beginning in the early 1960s, small ‘summer resident’ populations of Gray whales began to linger in various spots along their travel route: In 1962 Grays established a feeding site off western Vancouver Island. Later, Grays began to over-summer at the South Farallon Islands, and in sheltered bays and inlets along the coast, including Tomales Bay and San Francisco Bay. These opportunistic meals can be high-risk propositions. Gray whales, already vulnerable to shipstrike because of their near shore migration, are now targeted by curious boaters and paddlers eager for a closer look. Careless whale watchers could disturb the whales even as they attempt to eke out a hardscrabble existence. And the danger to small craft operators posed by a 40-ton whale should not be ignored.

Another concern: what foods are they finding in these newfound feeding spots? Is there enough to sustain them, or are these “junk food” pit stops? And are the whales ingesting toxins or bacteria? Scientists are currently looking at this.

Some researchers note that a melting Arctic ice cap may open up more northerly feeding grounds, allowing Gray whales to forage in the path of the receding ice. The most dramatic example is the solitary Gray whale sighted in May 2010 off Israel. It’s likely that it overshot the Arctic via the newly ice-free Northwest Passage, and found itself in the Atlantic, where it veered south and into the Straits of Gibraltar and Mediterranean beyond.

While we are still studying the responses and adaptations of the Gray whale to a changing ocean climate, we are advised to be cautious any time we may come into contact with whales, and give them distance and respect as they struggle to survive.

The Gray whale, Eschrichtius robustus, is alone in the Family Eschrichtiidae, and may be one of the oldest surviving cetacean families. Two stocks, or populations, remain: the Northeast Pacific stock off North America, and the Western Pacific stock, off Russia and Asia. The North Atlantic stock disappeared in the 17th or 18th century, perhaps helped into extinction by European and Yankee whalers.

E. robustus is a mid-sized whale, reaching around 50 feet and nearly 40 tons, with a streamlined body, narrow tapered head, and arched upper jaw. Its dark skin has gray patches with white mottling, often scratched, with patches of barnacles and orange whale lice. Newborn calves are a glossy dark gray to black. Grays lack a dorsal fin, but instead sport a ridge of knuckles extending from mid-back to the flukes (tail). 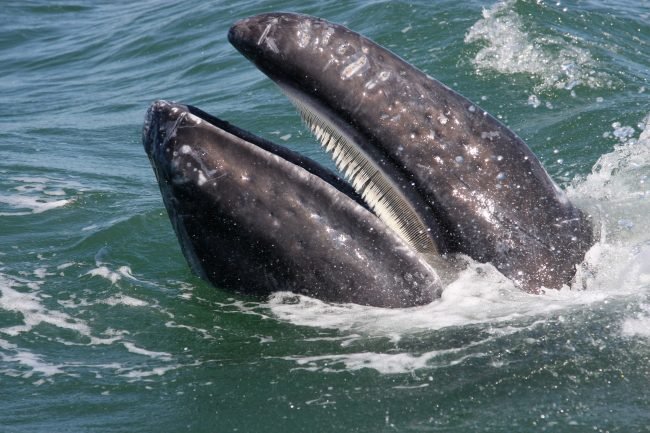 The Gray whale is a mysticete, or “mustached” whale like many large whale species, lacking teeth, but using bristle-like plates hanging from inside its upper lip as a sieve. It engulfs great mouthfuls of food and silt, often gouged from the seafloor, but sometimes gulped from the water column. The food is then trapped behind the baleen plates, while silt and seawater are spit out.

Its specialized behaviors–its fidelity to breeding sites and its near shore habits–have rendered the Gray whale unusually vulnerable to exploitation. Whaling brought the Gray whale to the brink of extinction several times until it was protected by international treaty. Although their numbers once recovered to nearly 27,000, about one third of the Gray whales died between 1999 and 2000, many malnourished. The reasons are still not fully understood. They now number around 19,000.

By using binoculars to assure a good view, and leaving the whales undisturbed, you can enjoy seeing these magnificent creatures while helping to assure their survival in the face of a changing ocean climate. 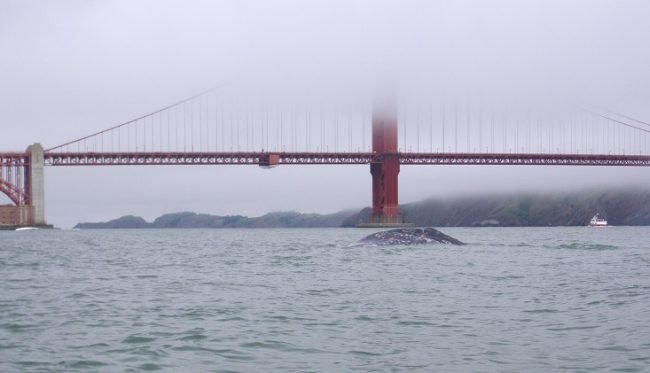 How to spot Gray whales

Gray whales can sometimes be seen from a kayak. Often the thing you will see is it’s bushy blow, which looks like a puff of white smoke about 10 to 15 feet high, since very little of the whale itself is visible at the surface (particularly when you are sitting low in a kayak). A whale may surface and blow several times before a prolonged dive, typically lasting from three to six minutes. On its last surfacing, sometimes you will see the fluke as it starts its deep dive.

Grays generally migrate south past our coasts in December and January. During this time, they are often a half-mile to a few miles off shore. Males and non-breeding females migrate back north in March, at about the same distance from shore. Mothers follow after their calves have grown strong enough to do the migration, around April-May. Cow-calf pairs stay very close to shore, and may even pause in quiet coves for the calf to nurse or rest. They may even roll among the breakers in the surf zone — which could provide refuge or a sound-screen to protect against killer whales that patrol the coast.

If you want to watch from a kayak, be aware that Gray whales are federally protected, with serious consequences for those who violate the rules. The Marine Mammal Protection Act (MMPA) of 1972 prohibits the “taking” of marine mammals, including whales. “Take” has been defined as “the act of hunting, killing, capture, and/or harassment of any marine mammal; or, the attempt at such.” MMPA has given National Oceanic and Atmospheric Administration (NOAA) the enforcement powers to make sure whales are protected.

Kayakers in the 21st Century aren’t usually out hunting for whales, but can possibly be in violation of the MMPA by harassing them. Because our boats are very quiet, we can sometimes get very close to whales before they notice us. But this stealth approach is also the tactic that Killer whales use, so Gray whales may be surprised by your approach (and could possibly react violently in defense).

The NOAA Office of Protected Resources has issued guidelines for boaters:

In addition to these guidelines you can also make sure you are not harassing the animal by ensuring that nothing you do causes the whale to change its behavior, even if this means staying further away than the guidelines listed above.

If you are not sure about finding whales and behaving correctly when around them, it may be easier to take a guided kayak whale watch tour.

Or you can increase you chances of seeing whales even more if you go on one of the whale watch cruises (often on fishing boats), which launch from most every major port in California.

And there is always the option of viewing these whales from shore, which you can’t do with most other whales. At the right time of the year, Grays can be seen from just about any shoreline, though you can increase your chances if you gain a little elevation (view from a bluff, rather than a beach) and go to a point of land that sticks out (possibly bringing you closer to the whales).

Mary Jane Schramm is a whale watch naturalist and media specialist for NOAA’s Gulf of the Farallones National Marine Sanctuary. She has led whale and wildlife expeditions off California and Mexico.

A video of the Gray whale in San Francisco Bay can be seen at
calkayakermag.blogspot.com/2010/11/graywhale.html.

2019 Update on status – in spring of 2019 there was an Unusual Mortality Event, with many of the whales found dead appearing to be emaciated. It is unclear if this lack of food is due to climate change affecting their foodsource off of Alaska, due to the whales reaching their holding capacity, or something else. Some details at https://www.fisheries.noaa.gov/national/marine-life-distress/2019-gray-whale-unusual-mortality-event-along-west-coast.

We are temporarily closed due to the COVID-19 Pandemic